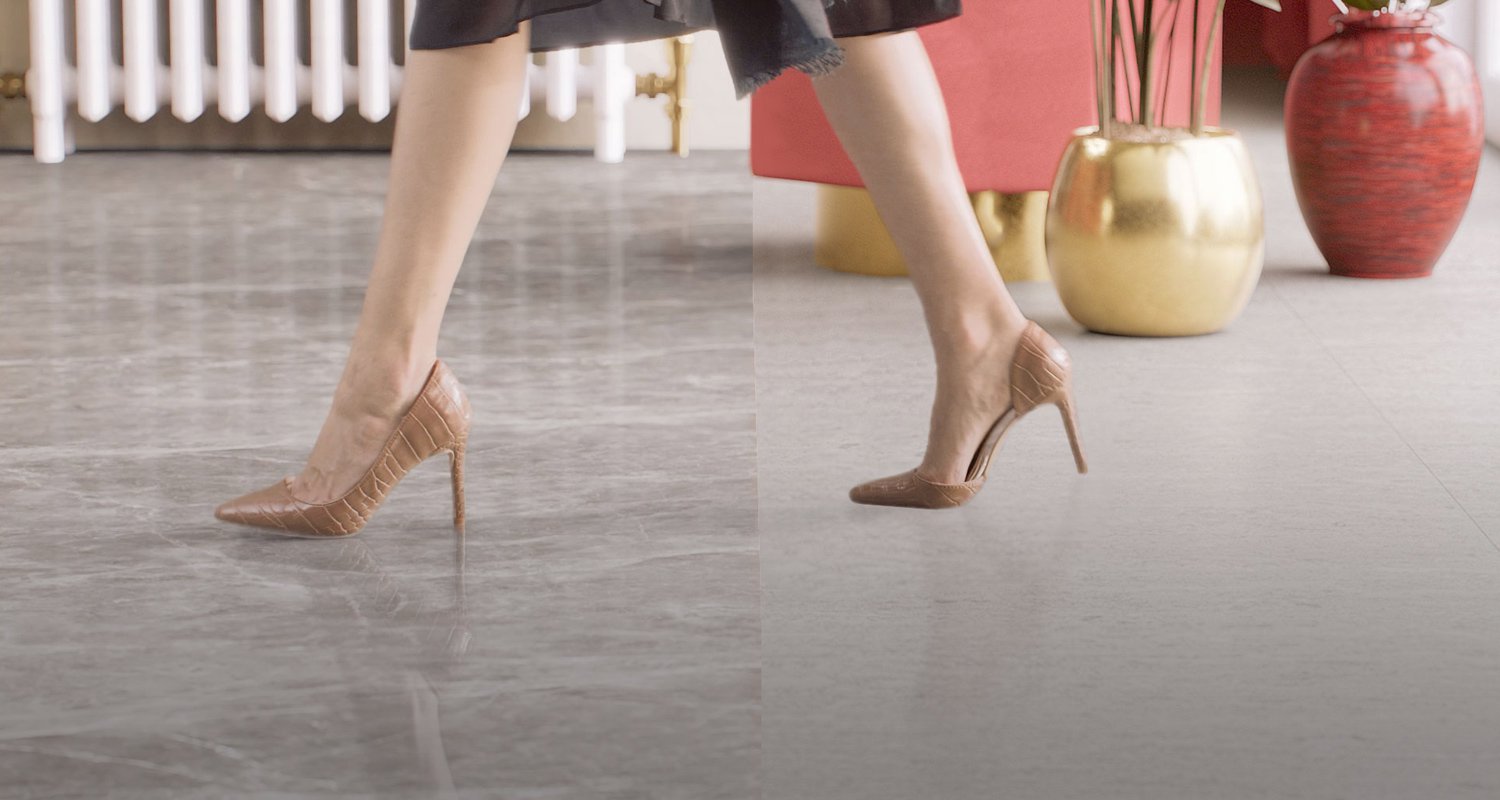 BUT CERAMIC...
IS A SAFE CHOICE

Discover all the advantages of ceramic. It does not contain plastic, it is fire resistant and it does not release toxic fumes. It does not expand, deteriorate, favour the proliferation of fungi, mould or bacteria and is recyclable. When properly installed, it guarantees long-lasting stability and hygiene in every room of the house, workplace or hospitality venue. 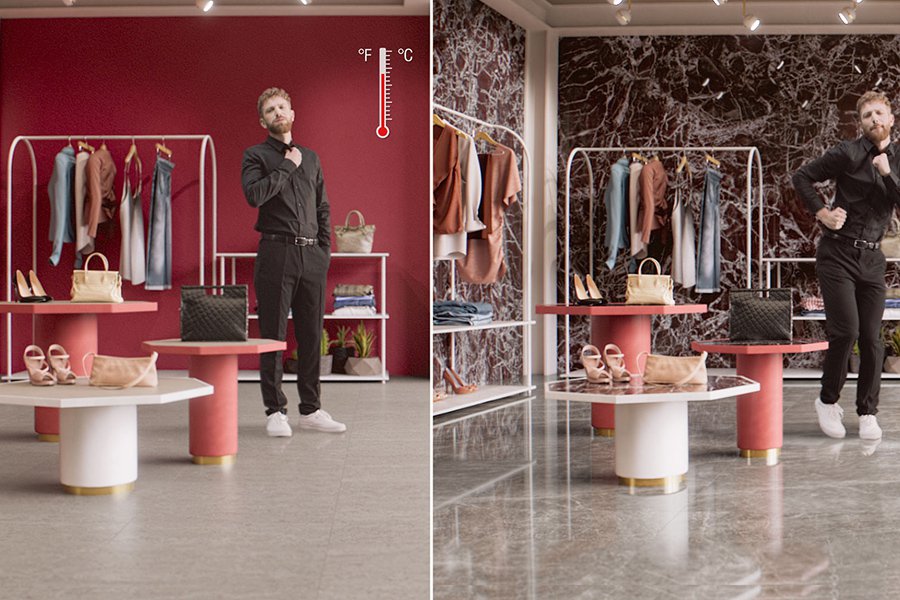 CERAMIC DOES NOT DETERIORATE OR EXPAND

Some floors don’t deteriorate or expand… as long as they are maintained at a constant temperature. But ceramic does not contain plastic, it does not deteriorate or expand, and it is extremely hard wearing. Heat may seriously affect the surface coverings in your home, resulting in dimensional changes and an uneven surface. If for example you leave a candle or a plastic object exposed to direct sunlight behind a closed window in summer, it will deform permanently as the temperature rises above a certain level. But because ceramic is fired at 1200°C, it can easily withstand even the highest temperatures that may occur in an interior, maintaining its original surface flatness and dimensions. 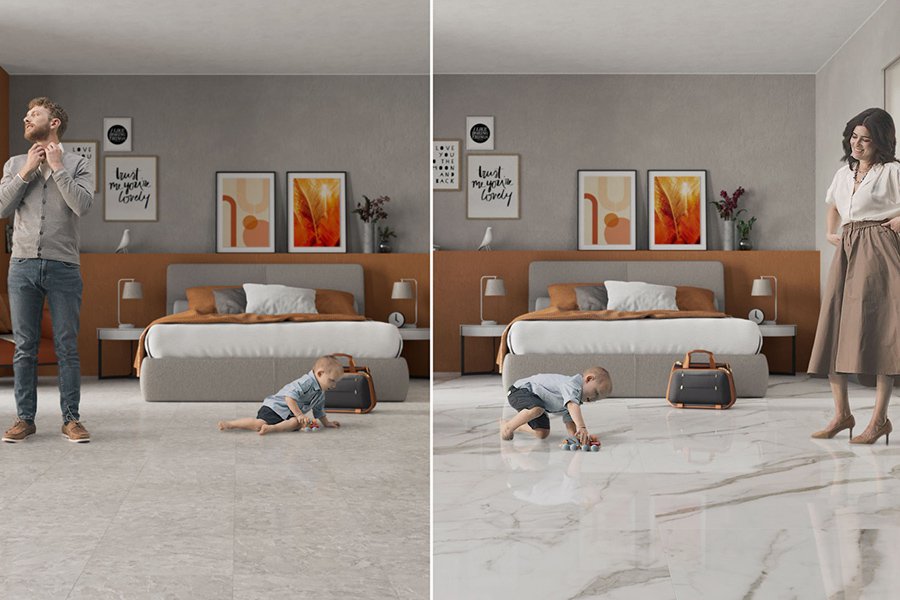 RESISTANT TO BACTERIA, MOULD AND FUNGI

CERAMIC DOES NOT FAVOUR THE PROLIFERATION OF  FUNGI, MOULD OR BACTERIA 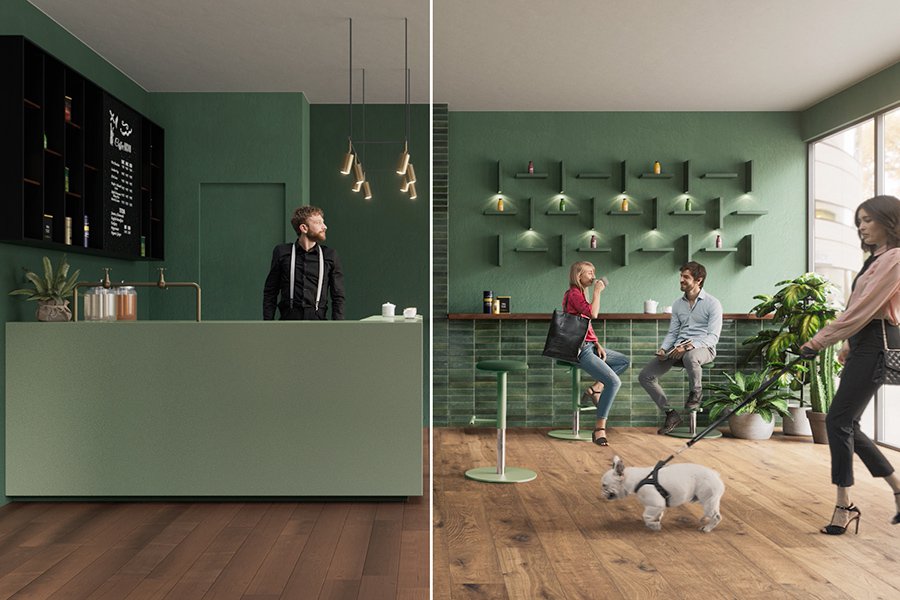 CERAMIC IS DURABLE AND SCRATCH RESISTANT

Some floors are durable and resistant to wear and tear… as long as they are replaced frequently. But ceramic does not contain plastic and is highly durable. How often, when looking at a floor against the light, have you noticed marks, scratches or small holes – perhaps caused by sharp heels or furniture – resulting in irreversible damage and giving the surface an old, worn look? And how often have you thought that the only way of solving this is to replace the floor? With a ceramic floor none of this happens because it is one of the most durable of all materials. When a ceramic floor is replaced, it is not normally because it is worn out but simply because the owner has found a floor he or she likes more or is more in line with his or her lifestyle. 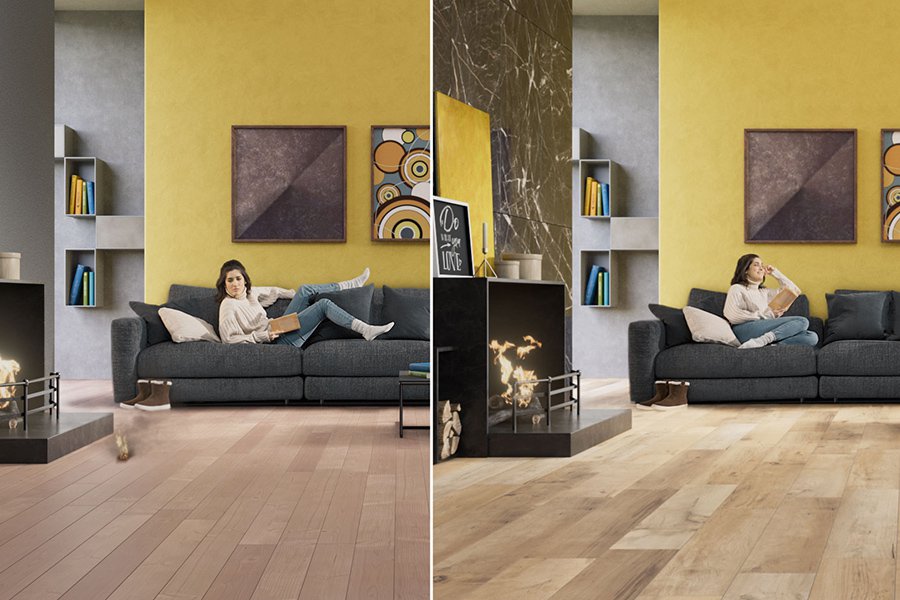 Some floors can withstand fire… as long as it is put out immediately. But ceramic does not contain plastic and is fire resistant. We use fire in our homes for cooking and heating, but it has always posed a safety risk if it propagates away from the kitchen hob or the fireplace. Surrounding these spaces with ceramic tiles is an effective way of improving safety thanks to their fire resistance. Using ceramic tiles for the splashback behind the hob or on the floor around the fireplace protects the surfaces from hot saucepans, spilled hot liquids and sparks. 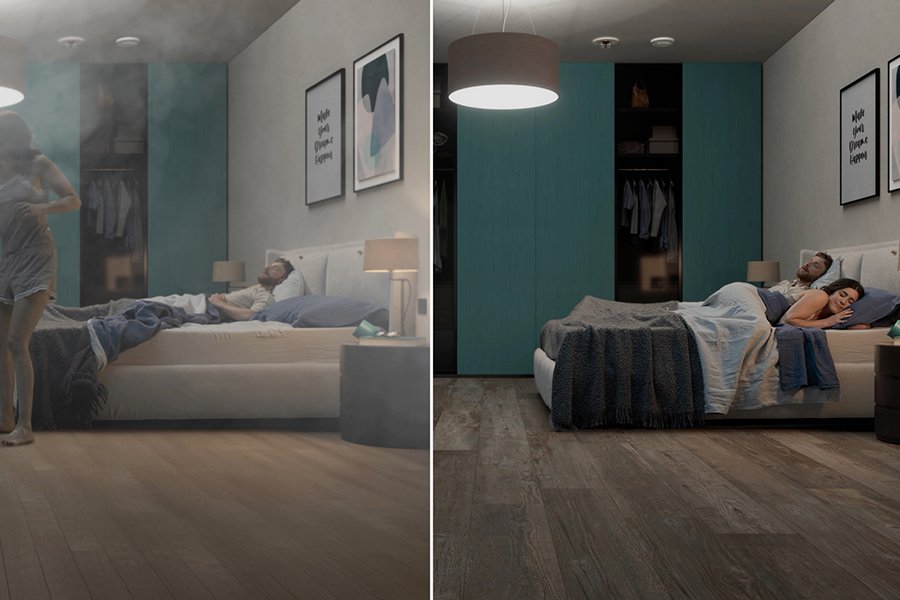 CERAMIC DOES NOT GIVE OFF TOXIC FUMES

Some floors do not give off acidic, corrosive or toxic fumes… as long as a fire doesn’t break out. But ceramic does not contain plastic or give off toxic fumes. When a fire breaks out, combustible surfaces containing toxic substances may burn and give off harmful fumes upon contact with heat. But ceramic is fire resistant and unlike many other floor and wall covering materials does not pose a fire risk to users. 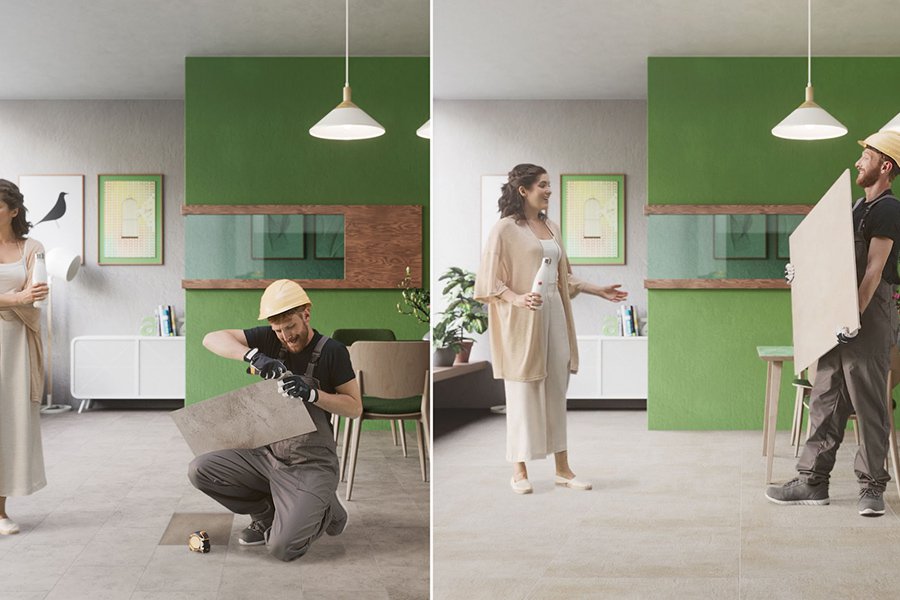 Some floors are recyclable… as long as the layers they are made of are separated one by one. But ceramic does not contain plastic and is homogeneous and recyclable. Collecting waste materials and sending them to recycle centres so that they can be given a new lease of life is one of the most urgent needs of our society, which uses too many raw materials and often releases waste directly into the environment. Ceramic is an inert material composed of natural elements such as clay and water, and can be easily recycled and reintroduced into the production cycle. 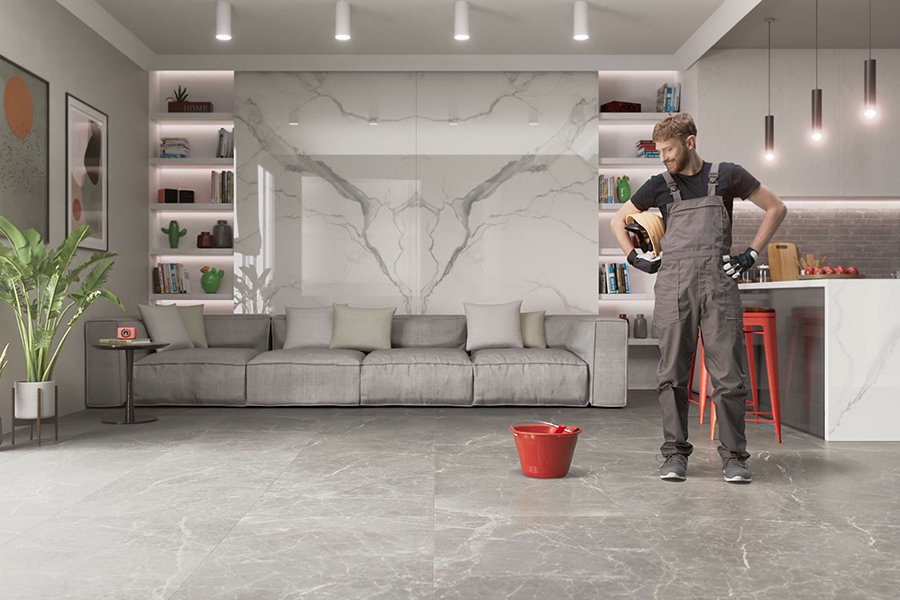 CERAMIC IS STABLE AND HYGIENIC

Professional ceramic tile installation ensures long-term stability, hygiene and beauty of floors and walls. When properly installed using dedicated adhesives, ceramic tiles bond firmly to the underlying screed. This may seem a minor detail, but it has many important consequences, including economic aspects. A well laid tiled floor is stable and reduces the risk of tripping, it is long lasting and does not need to be replaced frequently due to lifting or deterioration, and its beauty remains intact for many years.

The interior flooring market offers various types of materials that are often considered equivalent to ceramic in terms of their aesthetics and functionality. In reality, ceramic tile does not contain plastic and offers countless stylistic solutions such as marble, wood, stone and concrete effects and much more, making it the ideal choice for floors in all types of interiors. You can always find a ceramic tile with exactly the right surface to bring style and safety to the floors of any contemporary living space.